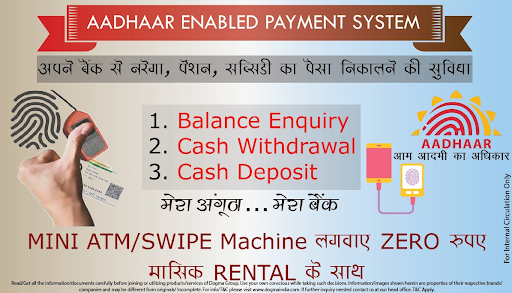 What is Aadhar enabled Payment System (AePS)-   AePS is an online payment system through which people can carry out financial transactions basically send money or receive money From one bank account to another, on a micro-ATM or Point-on-Sale (POS) machine by furnishing their Aadhar number and verifying it with the help of their fingerprint or Iris scan. AePS adds another level of security and it is less risky as bank details are not required to be furnished while carrying out fund transfers. AePS is developed by the National Payment Corporation of India (NPCI) to achieve the goal of Financial Inclusion.

One of the main objectives of AePS was to facilitate disbursements of Government entitlements like Social Security pension, NREGA, Handicapped Old Age Pension, etc. of any Central or State Government bodies, using Aadhaar and authentication thereof as supported by UIDAI.

The Issue: These days we are witnessing scams that are exposing the vulnerabilities of AePS. Under AePS, any person can withdraw money from her bank account using a local business correspondent (BC). A Banking Correspondent is an informal Bank agent with having a micro-ATM or point-of-sale (PoS) machine. Supposedly a bank account holder A wants to withdraw 1000 cash then she will ask the Banking Correspondent For the same and will furnish Aadhar and biometric details. The BC will use the Aadhaar and biometric details of A, and will transfer 1000 from the account of A to his own account. Account of a will be debited and account of BC will be credited. The BC will give 1000 cash from his own pocket to A.

But what if BC took 1500 from the account of A and gave only 1000 cash to A and does not provide him the transfer receipt. This is fraud and more prevalent in case A is poor and uneducated. BCs deny receipts to poor people even if they demand. As a safeguard, some PoS machines have a voice-over, but the voice-over is easy to disable. There lies one major vulnerability of AePS.

Even a BC can take money from any poor account holder, without giving her a single rupee, on the pretext of helping them to get a government scheme. What BC requires is the fingerprint that can be taken on the POS machine in the name of any government scheme. Aadhar can be easily known. This is what happened to Nagina Bibi, an elderly woman who lives in Vishunbandh village of Latehar district in Jharkhand. A roaming BC came to her house one day, from a neighbouring district. Claiming that he was helping her to get a gas subsidy, he persuaded her to put her finger eight times in the PoS machine and withdrew Rs 24,000 from her bank account without her knowledge. Most of this money consisted of her meagre pension and hard-earned wages, saved for her daughter’s marriage.

We are witnessing a number of such cases. Even if the fraudulent BC is caught, he can claim easily that he disbursed cash as per the bank account holder’s request. In this way these BCs operating with virtual impunity. It is just a trailer. Many bigger scams are in making using the loopholes of AePS. Briefly, the scam works as follows. Correct disease or middle man dried principles and take the list of minority children and other information. They apply for the scholarship on the behalf of children After opening Aadhar link bank accounts. Children would be given a small amount And the rest would be siphoned off without their knowledge.

APS is a valuable facility for people who don’t have access to banks. The risk gets huge when banks refuse to disburse the small amount to the customers and send them to BCs instead. The vulnerabilities of AePS are putting countless people in danger of being robbed of their hard-earned savings.

Way Forward: There should be a provision of customers’ passbooks and at least manual entries if not digital entries in the passbook. The entry would act as a variable receipt and will ensure the identification of BCs. There could be SMS alerts for the customers having mobile numbers. Roaming BCs should be banned from the area of low literacy levels. A better grievance redressal mechanism backed by RBI should be developed for the safeguard of victims.